It's moments like this that throw into sharp relief what Bullion is all about.

This weekend gone, we were at Play Expo Blackpool - our first show since COVID sent the world careening off the edge of the map and into "here be monsters" territory. The Bullion team are no strangers to turmoil - over the course of development more than one of us have faced life-changing events which we have navigated successfully. But, just like the rest of the world, COVID affected all of us in ways we could never have prepared for - so to be back at a show, demoing Bullion to people who love playing games, was a much-needed re-kindling of our enthusiasm.

From vintage cabs and rare consoles to modern PCs...

The impact of COVID showed in a number of ways: attendance was lower than we had seen in our previous visits to Blackpool, and we had a number of quiet periods at the stand. But despite this, the overall atmosphere seemed even more friendly and passionate than previously experienced; probably because this was the first chance for many to attend an event of this scale since the pandemic hit. Equally obvious was the increased sense of nostalgia that has arisen during this time, and this was reflected in the indie zone, with a strong presence from the ZX Spectrum Next team, plus new homebrew titles for the vintage Gameboy handheld (AsobiTech's D*Fuzed) and NES console (Lowtek Game's Flea! and Tapeworm Disco Puzzle), leaving both Ben and Paul H yearning for the Atari STs!

It was also a chance to catch up with old friends who we hadn't seen since pre-COVID times: Badger (from Stoffel Presents), TristaBytes, AsobiTech's Quang and Jim Bagley from the ZX Spectrum Next group, and of course, Andy, Simon and the rest of the Replay Events team.

But the jewel in the crown was undoubtedly our players. The enthusiasm and overwhelming positivity with which Bullion was received was a balm for the twenty months of uncertainty wrought by COVID. Better yet, a number of them remembered trying the game previously at the 2019 Play Blackpool show, and were delighted at seeing not just how the game had progressed, but also that suggestions that they had made at the time had been taken on board in its development since then. We even ran our very first official tournament with players competing throught the weekend in voyage mode, trying to gain the highest total treasure for a specially-built voyage and win a plushie of Captain Long John Silverside (provided by Sew 8-bit).

Eventually, of course, the show had to close - it was time to pack everything up and make the long journey back home. Except there was still one last surprise to come...

One of our players had asked for a photo with Ben (who he had played against). That photo was waiting in the Leda inbox when we got back, accompanied by the simple statement: "Loved it today. Great game - will definitely be getting a copy." 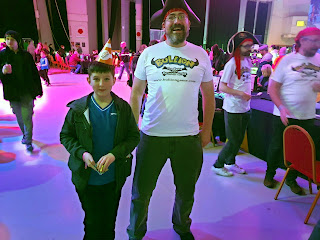 An amazing final surprise to end a great first show back

Over five years development time, and twenty months since our last show. Worth every second of it.