A Taste of the Pirate's Life...

With all the positive feedback we've received ever since our first show all that time ago, we decided it was high time we took the plunge and released a demo on PC!

You can check it out here: https://ledaentertainment.itch.io/bullion-demo

Demos have always been bit special for the older Bullion team members (aka Ben and Paul H). Back when our two programmers were but young scallywags with Atari ST computers and dreams of being game developers, playable demos were limited to what could be squeezed into the capacity of a single floppy disk - that's about a megabyte, if you're lucky! - and slapped on the cover of a monthly magazine... no internet back in those days! So releasing a playable demo by this means was considered something of an achievement - possibly more so than actually releasing a game!

Nowadays of course, the opposite is true - any would-be game developer can get a demo, or even a full game, out on the marketplace with barely a few mouse-clicks (and a bit of grind-work preparing all the required content!), and we are spoiled for choice when it comes to digital storefronts: Steam, Itch, GOG, Gamejolt... since all our previous releases have been either on mobile or Xbox 360, this was another "Bullion first" for us! Eventually we went with Itch.io, just for its ease of accessibility - however we are not blind to marketing trends, and so at the same time, we also set up a Steam page for the full game, and to allow people to wishlist (hint! hint!) for when we do release it. We're hoping to get the demo on Steam too but, thanks to a flurry of "life events" simply ran out of time before the release date! Ah, the joys of being a small studio...

So: demo live - check. Steam wishlist page - check. What else... ah yes! Public feedback has been at the heart of what we do even before Bullion was a concept, and the insight we have gathered from the shows we have taken the game to has been invaluable. So we set up a Discord server as well so that our demo players can let us know whether we should be showered in treasure... or walking the plank!

Of course, one thing we were ready for was the inevitable chore of putting together all the various content assets required for each storefront - imagery is always the pain-point here, with so many different sizes and aspect ratio requirements... just like back when we were making mobile titles! That said, back in those days at least the mobile storefronts required you to manually resize your imagery to all the different required permutations and upload them all, whereas on PC, this tends to be automated - it's a small thing, but we'll take it as a win!

Deciding exactly what to put into the demo was pretty tough - on one hand, we had a definite idea of what we wanted to showcase, but our experiences watching people play at expos showed us some very definite trends as to favourite characters and arenas... hopefully what we have here is a decent blend of the two: Gyutan Sands and The Locker can be played in the "avarice" game mode, players can face Salty Swamp's fabulous boss Queen Ella Gator in "defiance" mode, and a single voyage that links all three of these arenas together. Playable characters are limited to Captain Silverside and Bovy Jones - to enable the requisite four player action, each of these appears in two different colour schemes... could this be a hint of things to come...? 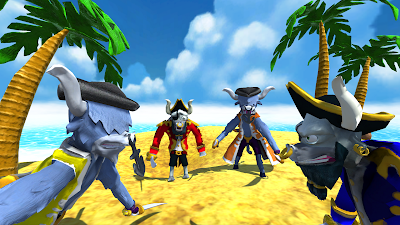 At the same time as preparing the demo, we've had all the normal activity going on as well. Ship's cook Beefy Stu was unveiled earlier this month as our fifth playable character - if things go the way we want (and by heck, the heathen gods owe us this much after the last few months!), we should be announcing a sixth next month, along with the next arena our mottley bovid miscreants will be making berth at! As ever, all details will go up on our social media as they happen - alternatively, sign up to our mailing list for super-advance updates!

... and then, of course, there's our plan for public shows and expos... but that's for future posts! Meantime, go grab the demo, give it a play, then join the crew on Discord and let us know what you think... we look forward to seeing you on there! 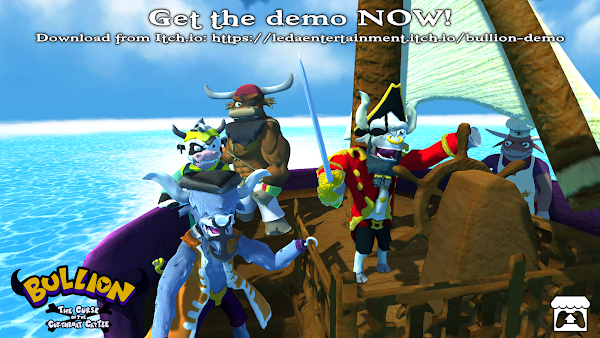